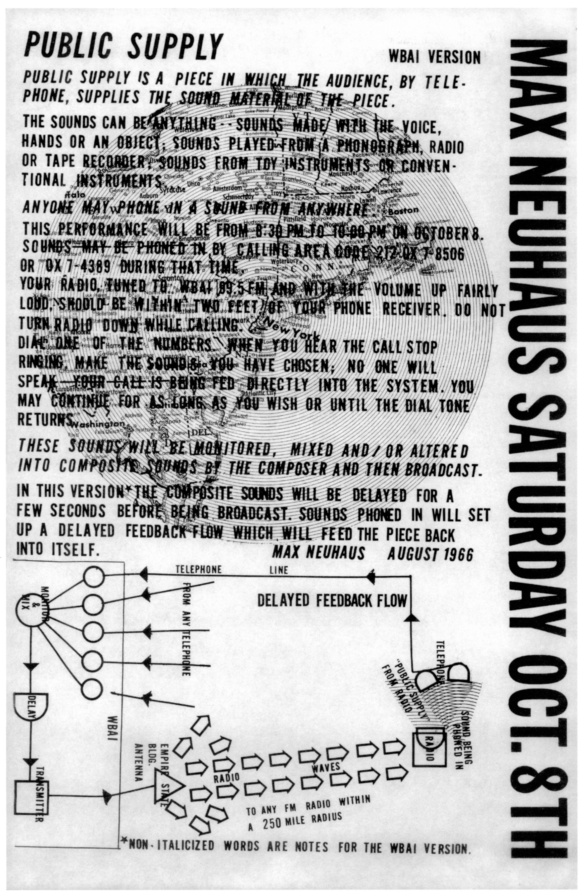 In Public Supply I, Neuhaus “combined a radio station with the telephone network and created a two-way public aural space twenty miles in diameter encompassing New York City, where any inhabitant could join a live dialogue with sound by making a phone call.”

Listen here to an audio file of the artwork. 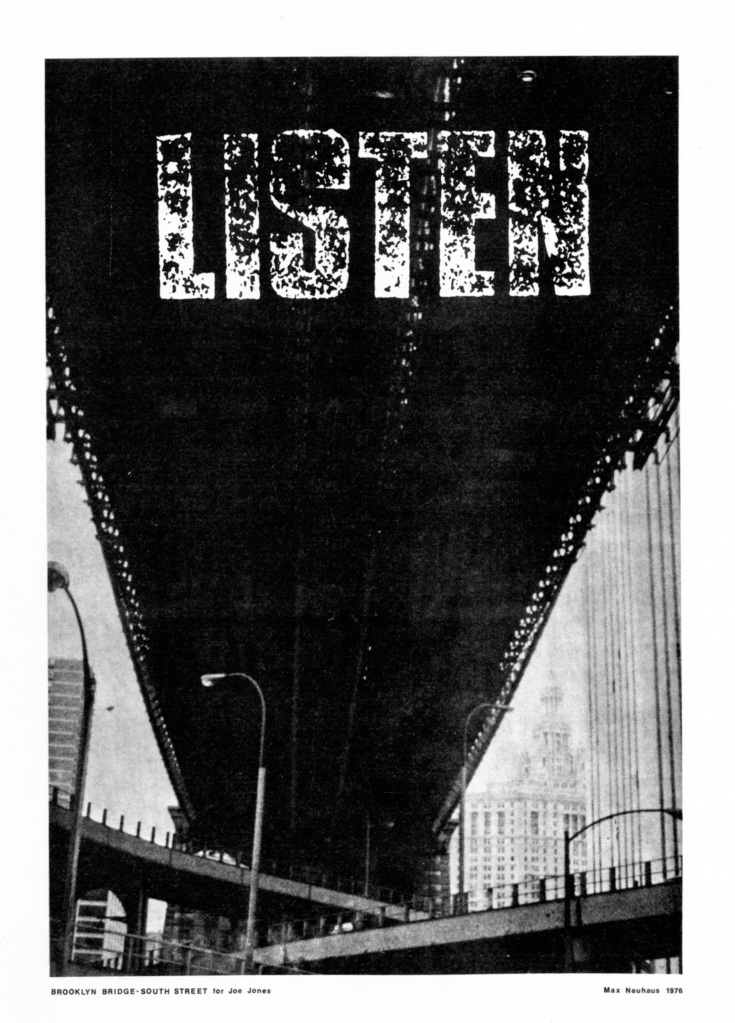 This poster was one of a series of artworks Neuhaus made on the concept of aural attention in various media between 1966 and 1978.

Of the poster above, Neuhaus wrote,

I organized ‘field-trips’ to places which were generally inaccessible and had sounds which could never be captured on a recording. I also did some versions as publications. One of these was a poster with a view looking up from under the Brooklyn Bridge, with the word LISTEN stamped in large letters on the underside of the bridge. It came from a long fascination of mine with sounds of traffic moving across that bridge – the rich sound texture formed from hundreds of tires rolling over the open grating of the roadbed, each with a different speed and tread.

Below: another fascinating anecdote from Günther Anders‘ life, excerpted from Paul van Dijk.

After fleeing Nazi Germany in 1933, Anders lived in France for a couple of years and then emigrated to the USA in 1936. He stayed in the USA until 1950, sporadically publishing fiction and essays, working odd jobs, adjuncting in the academic system, and putting together his non-fiction magnum opus, Die Antiquiertheit des Menschen (The Antiquatedness of Humankind).

For part of his American exile, Anders lived in California, trying (unsuccessfully) to become a Hollywood scriptwriter and making ends meet. Of this period, van Dijk writes:

His job as a cleaner of movie props in the Hollywood Custom Palace thus led him to reflections on the philosophy of history and on the theory of knowledge that are recognizable in his later philosophy on the media. In March 1941, he wrote in his diary:

“Even though I am classified as an enemy alien and as an unskilled worker, I have nonetheless found a job. Although the job is rather odd. For I have become history’s corpse cleaner. Since [sic] one week I belong to the cleaning crew of the Hollywood Custom Palace. The word “custom” has nothing to do here with customs; it refers instead to costumes. The twelve-story colossus, the “palace” where I spend my working days, is a museum of the entire costume past of humanity, an arsenal which rents out everything to the great film companies that our predecessors and our contemporaries, including their slaves, pets and riding animals, ever wore on their bodies and still wear today. From Eve’s fig leaf gadget (in both a see-through and a non-see-through version) to the riding boots of the German attack forces which–oh, such breathtaking optimism–hang next to the footgear of other eras, as if they already are brother and sister to the Greek sandals and the imperial riding boots, past history in other words. If I am instructed to polish these boots, then as an unskilled member of the cleaning crew I can hardly refuse. We flee from the original and then run the risk, a few years later an on the opposite side of the world, to have to clean the duplicates for pay!

Anyhow, we can learn a thing or two from this, even the fundamental truth of the rag philosophy. We human beings do not cover our nakedness to prevent ourselves from freezing to death, but because without cover we would be unable to present ourselves as persons of status, to establish hierarchies, to entice our fellow men or women, or to intimidate others. Surely, there are real needs at the basis of the fantastic discovery that is called clothing, but ultimately those needs are hardly physiological. The pieces that lie around here hardly include any that are strictly meant to keep warm. They are all instruments of dignity or to terrify or flatter, social instruments all. This truth is being whispered into my ear each day as I rub, brush or vacuum these pieces.” (1985, p. 1f)

The movie set of Alexandria, constructed in suburban London for Joseph Mankiewicz’s CLEOPATRA (1963) and abandoned six months into shooting. Accessed at http://images.travelpod.com/tw_slides/ta00/9b9/63e/cleopatra-set-on-backlot-slough.jpg

Anders was not alone in finding inspiration in the cinematic industry for his theories on the substitution of illusion for reality. The anecdote above reminds me of the Situationists’ sardonic treatment of a news item about the movie set for Cleopatra (Mankiewicz, 1963) in their 1961 issue of Internationale Situationniste.

The movie nearly bankrupted its Hollywood studio, in part because of the ornate and gigantesque “ancient Alexandria” set which needed to be built twice over the course of the production. The Situationists found this fiasco emblematic of spectacular culture: they believed capital and its images erode history and the present at the same time.

I’ve been intensely curious about philosopher, poet, novelist and media theorist Günther Anders since seeing Nicolas Rey’s anders, Molussien at the NYFF in October. I ordered the second edition of Anders’ Die Molussische Katakombe (Munich: C.H. Beck, 2012) and a handful of other texts on and by him. I’ll share here and in a second post two amazing anecdotes from Anders’ life that I found poetically ironic and Molussia-worthy. Both are in slightly screwy Dutch-inflected English, from Paul van Dijk’s Anthropology in the Age of Technology: The Philosophical Contribution of Günther Anders (Amsterdam: Rodopi, 2000) :

The first version of the book [Die Molussische Katakombe] was ready before Hitler came to power. Bertolt Brecht, who had helped him get a job as a magazine editor with the Berliner Börsen-Courier, for which he took on the characteristic pseudonym Günther Anders (anders means “different,” referring to his Jewish self-consciousness), handed the manuscript to Brecht’s publisher Kiepenheuer. But it was too late for publication; the Nazi secret police were a step ahead. The publisher, however, had given it an innocent look by presenting an old map of Indonesia on the cover, showing the mythical island of Molussia. When the Gestapo invaded the publishing plant, the trick turned out to work. The censors took only a cursory look at the manuscript, apparently thinking that it was some South Seas fairy tale, and sent it back. Nonetheless, the book could not be published in Germany, also not in France, and thus lost its function as a warning against the Nazi political system. Not until 1992, sixty years later, did it appear in print, with Beck, Anders’ publisher in Munich[…]

On 28 February 1933, one day after the Reichstag fire, an advance publication of Die Molussische Katakombe appered in the Berliner Tageblatt. From that day onward, Anders belonged to those who were no longer safe in Germany. Via Brecht, he had recovered the manuscript of his novel. Since he knew, however, that his name appeared in Brecht’s address book, which had fallen into the hands of the Gestapo, he fled to Paris. He did not dare to take the manuscript with him. It was hidden by friends, wrapped in parchment paper, in a chimney flue between the smoked sausages and hams. For months, it hung in there, until Hannah Arendt, Anders’ wife at the time, who later was to become famous as a philosopher, emigrated to Paris also. For the time being, it received a different purpose, as Anders tells it. “As we did not have enough to eat at times, I used the manuscript as an aromatic sauce. I smelled it when eating my baguette.” (1987b, p. 31).