A quick bit of Oscar peevishness: skimming through Nate Silver’s Oscar predictions, it looks like Argo is a shoe-in for Best Picture. A shame, I think.

I saw the film last month, and walked out of the theater shaking my head at the missed opportunity it represented: the Iran hostage crisis (shot in Turkey)! Six bumbling escapees! A CIA exfiltration specialist! A faux orientalist sci-fi movie as cover-up! And of course, best of all, rescue Canadians!

What absolutely reactionary use of endlessly fascinating material. I sat up straight for the first forty minutes of film, waiting expectantly for the story to get weirder and weirder. After all, much of the narrative build-up in the first “act” is so cliche (the painstakingly and lifelessly reenacted protest tumult, the whole “father in a problem marriage estranged from innocent son” trope, the terrible scoring) that it could have easily served as the trigger for a truly marvelous extended mise-en-abyme.

I imagined a demonstratively fake film (featuring Americans in jeopardy in the treacherous Middle East)…about the faking of a film intended to help Americans in jeopardy in the treacherous Middle East. But aside from a few careful jokes (“Marx said, ‘history repeats itself, the first time as tragedy and the second time as farce'”) the film is far too timid to go all the places it could have gone. Speaking of Breathless in 1968, Jean-Luc Godard quipped, “I thought that I had filmed Son of Scarface or Return of Scarface, and I realized [when I saw it for the first time] that I had actually made Alice in Wonderland, more or less.”

As lovely a moral tale as Godard had crafted for himself in his political modernist phase with that statement, anyone who has seen Breathless knows that Godard had this realization while shooting. He shows us his emulation, then his failure, and how an entirely new and electrifying film form has resulted from the process. In the hands of someone a good deal more brilliant and a great deal moins lâche, Argo could have been a vastly superior Tabu.

When Ben Affleck takes the podium to thank the Academy for his Best Picture award, I’ll be thinking of him in brownface in his film, his ridiculous bangs in his eyes and his lips slightly parted in quiet Everyman competency. I’ll think of Roland Barthes’ “The Romans in Films” from Mythologies (1957). Like the fringed hairdos of the ancient Romans in  Joseph Mankiewicz’s Julius Cesar (1953) the obsessive attention to historicized mise-en-scene in Argo reveals its inferiority complex to careful spectators.

We therefore see here the mainstream of the Spectacle — the sign —operating in the open. The frontal lock overwhelms one with evidence, no one can doubt that he is in Ancient Rome. And this certainty is permanent: the actors speak, act, torment themselves, debate “questions of universal import,” without losing, thanks to this little flag displayed on their foreheads, any of their historical plausibility. Their general representativeness can even expand in complete safety, cross the ocean and the centuries, and merge into the Yankee mugs of Hollywood extras: no matter, everyone is reassured, installed in the quiet certainty of a universe without duplicity, where Romans are Romans thanks to the most legible of signs: hair on the forehead (26).

The corduroys and the glasses and the late-seventies hair “overshoot the target and discredit themselves by letting their aim clearly appear” (26). If only Affleck had overshot farther still!

Some scans of Sigmund Freud’s home and psychoanalytic practice at Berggasse 19, from the book The Surreal House (ed. Jane Alison, Yale, 2010).

The first two are photographs from the famous series that Edmund Engelman made just before Freud had to flee Vienna in 1938. Of particular interest to me, amidst the mixed statuettes from China, Greece, and Egypt, is the mirror hung from the crossframe of Freud’s window. The id juxtaposed with the ego?

After that are selections from a series of velvety graphite and charcoal drawings of Engelman’s photographs by Robert Longo. The last two are outside of the interior. They are meant to be displayed as a diptych. Longo’s drawings uncannily translate the photographs (indexes of Freud’s psychoanalytic practice) back to the work of the hand, perhaps the metonymic subject of psychoanalysis itself.

I imagine Freud will soon be the focus of another round of scholarly inquiry (perhaps artistic inquiry, too). It seems that there are many more opportunities for turning his schemas and theories on their head in the way that feminist scholarship did in the 1980s and 1990s, aided in part by translations and compilations like Elisabeth Young-Bruehl’s Freud on Women. 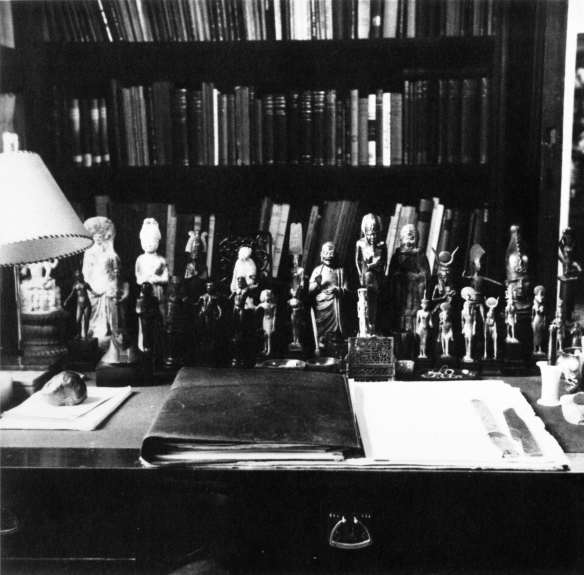 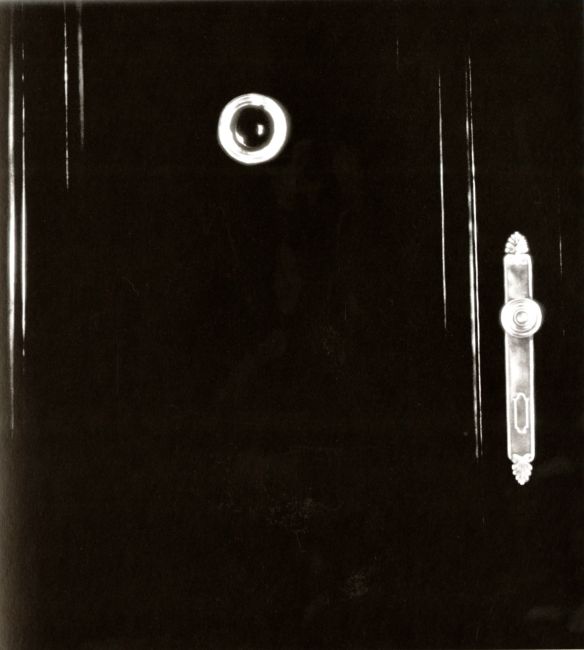