I appreciated the stimulating feedback on my work in progress and reconnecting with Rebecca DeRoo, a fellow hybrid art historian/film theorist/Francophone.

At lunch afterward, a fun and very thought-provoking exchange with Homay King, Katherine Rochester and Johanna Gosse prompted me to record these thoughts on Paris’s May 1968 and commercial fiction film:

For Anglophone audiences, Bernardo Bertolucci’s The Dreamers (2003) is more or less the go-to ’68er historical adaptation. The Dreamers is interesting in passages, but generally a quite empty viewing experience–neither historically nor politically nor emotionally insightful.

I believe the weaknesses in both films lies in their misguided attempt to allegorize May as an individual love story–one that purports to be a lover’s triangle, but in reality is just two sets of couples that happen to have one person in common.

If Paris’s May and its paradoxes are to be accessed, the way to do so is in exploring love, sexual awakening or elective affinities more generally in juxtaposition with the idea of collectivity or collaborative projects. This is why the most arresting and contemplative moments of Après mai (disappointingly titled Something in the Air in English) come at the very end, as Gilles takes his first steps into film production and, ironically enough, also cracks open the Situationist International’s ode to collective dissolution La véritable scission dans l’Internationale (1972) whilst riding in the RER.

SOMETHING IN THE AIR, Olivier Assayas, 2012. Image accessed at http://media.tumblr.com/tumblr_mej0s8YuKd1r988uj.jpg

One pick for teaching France’s May ’68 would be Louis Malle’s Milou en mai / May Fools (1990), a disturbing homage to Marx’s idea that history repeats itself as farce (farce and cuckoldry, it seems).

Two other films released much closer to the bitter disbelief and disillusionment following May’s moveable feast would be Jean Eustache’s La Maman et la putain / The Mother and the Whore (1973) wherein the love triangle turns out to be a kind of triple-edged weapon, injuring everyone in turn…

…and Jacques Rivette’s epic Out 1 (1971), in which the social revolt is an unacknowledged MacGuffin that motivates the relationships of all characters to one another.

A final film we spoke of that afternoon: Sally Potter’s excellent Ginger and Rosa (2012). Although it’s not a film about France’s ’68 per se, the themes it treats are extremely resonant and provocative when considered in that context. I disliked the fact that the film transposes the backlash against consumer society into family trauma, but I thought that move was highly creative and very worthy of scholarly close looking.

A second post soon that gathers together some excellent French shorts on the subject of May ’68.

If only Louis Malle’s 1975 folly, Black Moon were a short film! The first twenty or thirty minutes are frightening and sublime. A young woman tears through wild and beautiful countryside in the attempt to escape a strange civil war between men and women. I began watching, and expected something like the political allegory of Peter Watkin’s Punishment Park (1971) to develop.

However, Malle is uninterested in the problems and the possibilities of something like feminist armed resistance. Like the bedridden old woman (Thérèse Giehse) later in the film who radios nonsense to some unseen master narrator, Malle relays the tone, suggestion and gesture of sexual identity instead of any cogent expression of it or any attempt at agency through it. Ultimately the film is a retrospective, Bathusian muddle, breathtakingly filmed by Ingmar Bergman’s cinematographer, Sven Nykvist. I recommend the extraordinary trailer.

Claude Sautet’s Classe Tous Risques is an odd little growing pain of a film. It is fascinating to watch the way that the cinematography and story negotiate (sometimes clumsily) between the stolid camera of 1950s French cinéma de qualité and the energetic errors and innovations of the New Wave.

The film was in theaters at the same time as Breathless, and was of course immediately drowned out by the attention given to Godard’s feature length debut. I love the idea of doppelgänger Belmondos on the screens of Parisian movie houses–one telling his audience to go screw themselves if they don’t like the countryside, one trying out a heavy-handed pick up line only to shyly add, “…that is, if you’re interested.”

What unites the films is the way that elliptical editing becomes synonymous for a postwar social informality, a social intimacy, a social shorthand. Sequences from Classe Tous Risques in conjunction with one from Breathless will now become my go-to example for the filmic device and its New Wave before, in transition and after.

Of the essays in this compilation, I found particular inspiration in “Sign and Trace,” written on the artwork of Anish Kapoor. 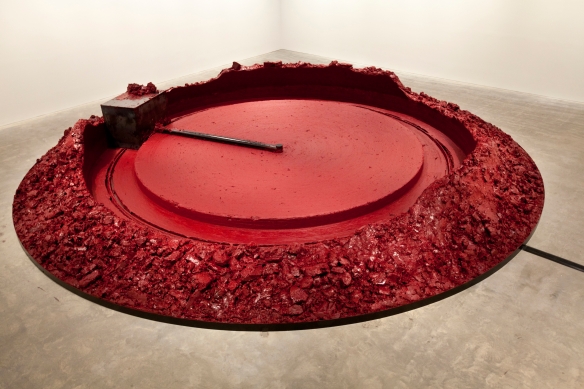 She goes on to explain that we shouldn’t think of the global in terms of exchange that “privileges host or target, ceaselessly and indefinitely” (493). Instead, globalization means that we humans are in the peculiar position of being bounded or restricted by the nature of our national, social, racial and gendered circumstances, yet we live constantly alert to the radically different circumstances of others beyond our boundaries that we can’t quite decipher, that we don’t totally understand. Spivak repeats,

…globalization makes us live on an island of language in an ocean of traces, with uncertain shores ever on the move. This “we” extends all the way from those who can view Anish Kapoor at Guggenheims to the unending circulation of labor export from the global South. Each member or collectivity belonging to this tremendously large group understands one or a few languages and is sure that the other organizations of noises are meaning-full but not for him or her. Language and trace are here in a gender-differentiated taxonomy rather than merely opposed. 493

For those of us working in visual studies, the end of this essay is especially thought-provoking. Spivak confirms that images are “islands of meaning” in a different way than language is. Images exist in an ocean of traces, sure, but they are traces, too, and in a less definitive way than words can be. Like all of the sand suspended in each watery wave, images make us aware that the distinction between our island of sense and the global around us isn’t as drastic or clear cut as we might think.