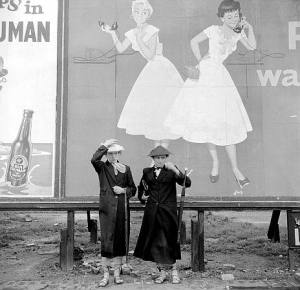 The Party Line, Ken Russell, January 1955. From the series: “The last of the Teddy Girls”

The future belongs to the dandy. It is the exquisites who are going to rule.
— Oscar Wilde, A Woman of No Importance

Unbelievably, I’ve never seen a Ken Russell film. Now that I have enjoyed his photography, I’ll make a point to watch some. Slideshows of Russell’s photos can be found here and here; particularly intriguing are his photographs of Teddy Girls, made with participative humor and candor at a time when all the subcultural attention was going to the boys. If indeed the Teddy Girls were flouting postwar austerity with their get-ups, they were also thumbing their noses at late modernist consumer culture and its suggestions for acceptable femininity.